A Short History Of The Sound Off Podcast 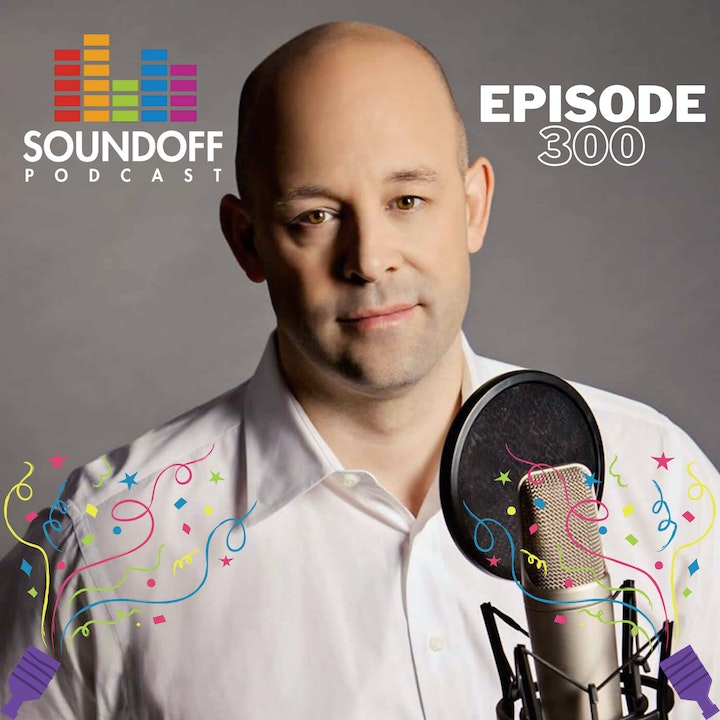 We're finally at the big 300, an episode years in the making. As it's tradition for podcasters to do something special for milestones like this, I thought it would be the perfect time to look back on how exactly we got here: Where we started, the mistakes we've had to correct, the ways the show has evolved since 2016, and most importantly, the people who helped us get here, and continue to help today. And yes, of course that includes all our loyal listeners as well.

If you are a returning listener, consider this episode a heartfelt thank you note, and also an anniversary gift of sorts. You'll hear mention of a huge number of other podcasts and podcasting resources for you to check out- or you could go back and listen to some of the old episodes we've recorded with these honored guests.

The Sound Off Podcast. The podcast about broadcast with Matt Cundill starts now.

This week, we have landed on episode 300. I think a lot of podcasters feel compelled to do something special when you get to a nice round number. For 100, I did a three hour show with my former co-host at the Bear in Edmonton, Jake Daniels. I did nothing for 200. And here we are at 300, and as I write and record this, I'm somewhere between Cordoba and Granada, Spain, where I've have spent the better part of the last month. This podcast started when I bought two tickets the Podcast Movement event in Chicago in 2016. I thought it would be a good idea to at least have a podcast, so I could say: "Hey. I got a podcast." I wasn’t really sure what it should be about, but the only thing I knew in life was radio, so that seemed to make sense. The best radio podcast at the time was the Radio Stuff podcast by Larry Gifford, who is now the News Talk lead at Global Radio, based out of Vancouver. By the way, Larry now does the highly successful "When Life Gives You Parkinson’s" podcast, and if I do mention a podcast in this episode, you'll likely find a link to it in the show notes of this episode. Episode 1 featured Andrew Wilcox, and it was about the fires in Fort McMurray which had displaced everybody back in 2016. I also was curious about how radio was would act and react during the crisis. Although it’s not the most evergreen of episodes, it tells a great story about the perseverance of the Harvard broadcast staff in that moment. What the episode does not reflect is that it took 8 hours to make an 11 minute piece of audio. Holy shit. Podcasting is a lot harder than it sounded. The following episodes got easier- Not really. I got to episode 4 and then I said, fuck this shit. I don’t know enough about mixing and audio quality to make it sound the way I want. I wanted it to sound like radio. So I asked Evan Surminski to oversee production. And that’s why the show sounds so awesome now.

But trying to have it sound like radio was another mistake I made. Podcasts and radio are wildly different, and it took conversation with former KFOG imaging producer Jeff Schultz to say, "Hey. The sound of your podcast? It’s a little obnoxious to the ears. Why don't you back it off a bit?" I think that was around episode 111 or 112, and we made a commitment to make it sound more podcast. A couple of things began to happen around episode 20. Mark Ramsey was a guest on the show, and off air we started to talk about how shitty Soundcloud was. How the stats are bullshit, and it’s full of bots. And a second thing happened that same month. David Phillips from Nlogic wanted to partner up, and do some stuff together. So we did an episode. And then he bought some ads. Now if you're in American radio and you're hearing an Nlogic ad, it's really a bit of a waste, because Nlogic is built for Canadian radio. Enter Sean and Roddy from ART19, who showed me the power of dynamic ad insertion. Now the Nlogic ads can run in Canada, and I could re-sell the other ad space to an Amercian client- which is what happened next. Promosuite came on board, and have been with us since 2017. By the way- did you know the ad copy is different in both countries? See, this dynamic ad thing? It's pretty cool. So this is where I say to you that if you're into podcast ads, and you want your podcast ads to update through all the episodes and target them into regions- you can reach out to Roddy at Art19. Oh and by the way, I know a lot of people say Dynamic Ad Insertion. It's really dynamic audio insertion. Y'see, if you want to make an update, it doesn't have to be an ad. it can just be about the show itself.

The Sound Off Podcast has indeed evolved. We have used features, and that was stupid. Features are for radio. Podcasts do well when they are about stories. And there are a number of episodes where there were tears, or revelations, or moments of personal truth. So thanks Bob Harris, Mary Anne Ivison, Terry Dimonte, Sue Tyler, Gruff Grushnowski, Zenga McCurdy, Shannon Burns, for shedding a tear or revealing your personal side. Much like radio, we evolved the imaging with different voices like Jessica Binstock, Amanda Logan and now Tara Sands. We continue to work on our sound. And yes, I have my favourite episodes… I think the ones I like the most are the ones where the podcast introduced me to someone I have followed for years but have never spoken to. Broadway Bill Lee, Art Vuolo who does those Vuolo video air checks that I grew up watching and admiring. Lisa Guerrero from Inside Edition, who I used to watch on Fox Sports and Monday Night Football. Terry O’Reilly, who I've listened to for years on Under the Influence on the CBC, which- by the way- is a show that works as well on radio as it does as a podcast. And Christopher Ward  and Stu Jeffries who I watched on Much Music and Good Rocking Tonight respectively.

There are also a collection of people we bring back on a regular basis, because their work is relevant to the entire broadcast industry. The team at Jacobs Media, Paul, Fred, Seth Ressler. Jeff Vidler at Signal Hill Insights, Steve Goldstein from Amplify Media, James Cridland from Podnews.net and Jason Barrett from Barrett Sports Media have all taken time from their work to come on the show and share what they know in the name of making your broadcast product better. We have had some great supporters over the years too. Justin Dove at Core Image Studio. And I mentioned Promosuite, like Rocco and Rachel, and CJ, who's actually moved on from Promosuite now, but say hi to Dean who's in there now. We've also mentioned the people at Nlogic. And hi to Ilyana at Megatrax- that’s the company we use for music beds. And a hello to our latest client: Jamie at ProdJamie.com, who has the very affordable CHR prep sheet. By the way, you can get it now at prodjamie.com. Also a big thank you to the people who share the show weekly. Shawn Smith and Connie Tiesen from Broadcast Dialogue, you've been awesome to put the player into your weekly newsletter. And if you're listening to this and you're not signed up for their newsletter, you can find that in the show notes of this episode as well. Also thanks a lot to Michael Easton at Puget Sound Radio, who posts the show on his site. Your support is greatly appreciated.

It takes about 15 hours to put together every episode. Between recording, producing, marketing, writing, scripting, voicing and getting together all the marketing assets, and now posting a transcription. It takes a long time to do this well. Which brings me to the people who help me do this every week. Evan Surminski, Courtney Krebsbach for marketing assets, Taylor MacLean for the editing, Aidan Glassey for the transcription review and other marketing assets. And over the years, there have been two people who have really set the tone for what the marketing would look and feel like. Lauren Siddall was our first hire, and she did some of the best marketing pieces from scratch. She is now working at 26 Projects in Winnipeg, and if I had a plate of carbonara that I needed photographed, I would totally hire her to do it. She is an awesome food photographer and really set the bar high for the marketing of this podcast. Kendra Magnusson came in after, and was a big help in driving what the show needed in terms of targeting guests, and getting the show in front of different broadcast audiences, and marketing right into the broadcast space. She is hopefully listening to us from Australia, where she is enjoying life in Sydney. Marketing is such big part of any podcast’s success, and in the coming weeks, I hope to publish a blog about why the marketing for this podcast has worked- and maybe a few things that have not worked. Namely Facebook ads.

And finally, thank you to you. The listener. For the social media, the shares, the word of mouth and the recommends, and for subscribing to the newsletter. For hitting "Follow" or "Subscribe" on your favourite podcast app. Are there another 300 episodes still in me? Yeah, I think so.

Transcription for The Sound Off Podcast is powered by Poddin. Your podcast is an SEO goldmine. We help you to dig out. Start your free trial now at Poddin.io.

The Sound Off Podcast is written and hosted by Matt Cundill. Produced by Evan Surminski. Social media by Courtney Krebsbach. Another great creation from The Soundoff Media Company. There's always more at soundoffpodcast.com.